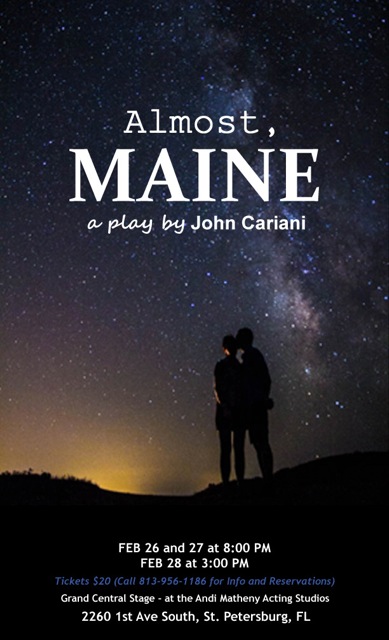 JOHN CARIANI’S PLAY
ALMOST, MAINE
Production Dates: February 26-28, 2016
Almost, Maine is a play by John Cariani, comprising nine short plays that explore love and loss in a remote, mythical almost-town called Almost, Maine.ST. PETERSBURG, FL—The Grand Central Stage Theater Company will premiere its first staged production with the play, Almost, Maine. The upstart theater company hopes to make a mark in St. Pete’s growing theater community with writer John Cariani’s tale that takes place on a cold, clear, moonless Friday night in the middle of winter. Yet all is not quite what it seems in the remote, mythical town of Almost, Maine. As the northern lights hover in the star-filled sky above, residents of Almost find themselves falling in and out of love in unexpected and often hilarious ways. Knees are bruised; hearts are broken. Love is lost, found, and confounded. But the bruises heal and the hearts mend – almost.

The New York Times called the play, “a whimsical approach to the joys and perils of romance (where) magical happenings bloom beneath the snowdrifts,” in one of the many favorable reviews.
“Sweet, poignant and witty,” said The New York Daily News.
“John Cariani aims for the heart by way of the funny bone,” – The Star Ledger.
Almost, Maine is directed by the trio, Karleigh Chase, Michele Young and Jamie LaBudde, who make certain you’re in for a good time with an experienced crew of talented actors, many of whom are from The Andi Matheny Acting Studio.